An article submitted by the Namibian Association of CBNRM Organisations (Nacso) was published in The Namibian on 7 October 2021. The article is based on a broader research piece, published here:

A recent opinion editorial  published in The Namibian used our 2021 game count data from the Kunene Region as a reason to undermine the Namibian community-based natural resource management (CBNRM) programme. The author’s approach is unfortunate, given that producing this information during 2021 is a testament to the resilience of the CBNRM programme in the context of COVID-19.

The data we produce is part of our joint mandate with the Ministry of Environment, Forestry and Tourism (MEFT) to ensure that management decisions are based on the best available evidence and are done in a transparent manner. This system of monitoring, in terms of the details provided, the size of the area covered, and the regularity with which it is produced is unparalleled in Africa, and possibly the world. This system is about more than just monitoring, though, it is an integral part of adaptive management, whereby data from several reliable sources are used to inform decisions like game harvesting quotas.

This form of management is particularly useful in an arid ecosystem (although it is applied equally to the wetter parts of Namibia), because one of the key features of this ecosystem is unpredictable rainfall. If harvesting quotas were set and not reviewed for many years at once, they would not keep track of the rainfall and subsequent wildlife population trends. Under the current quota setting system, a thorough review of data from game counts, event books and (where applicable) aerial surveys is completed every three years to set a benchmark quota for the next three year period. This quota is revised annually thereafter to include data collected each year to either increase or reduce quotas on a conservancy-by-conservancy basis.

Annual reviews allow for a highly responsive management system that quickly reacts to prevailing conditions. Doing the exercise at the conservancy level also accounts for the spatial patchiness of rainfall in this ecosystem, as one conservancy may get much more (or much less) rain than their immediate neighbours in a given season. Because conservancies are not surrounded by wildlife-proof fencing, the wildlife is free to migrate over a large area between the Skeleton Coast and Etosha National Parks. Wildlife may thus move to conservancies that receive more rainfall, thus temporarily reducing the population in less fortunate conservancies. Allowing the free movement of game in semi-arid areas is thus critical to their long-term survival.

Despite this functional management system, there are factors that are beyond our control. This has become painfully clear to many people in the Kunene, as drought conditions prevailed in the region since 2012. After excellent rains in 2011, the 2012 rains were disappointing and 2013 was worse (rainy seasons fall at the end of one year and beginning of the next; here we refer to the year in which the end of the season falls). Areas south of the veterinary fence had a brief respite in 2014, but the next couple of years reverted to drought conditions.

Adapting to these conditions required slashing game harvesting quotas in 2015 to less than half (springbok) or even a third (gemsbok) of the 2014 quota (Figure 1). Importantly, the conservancy management committees made the decision to stop shoot-and-sell hunting (A.K.A. “biltong hunting”), which requires high quotas to make a reasonable financial return. This is an example of adaptive management at work – game count data, rainfall, and vegetation conditions were presented to the conservancy committees, who then made an informed decision with the relevant MEFT officers.

Figure 1. Game harvesting quotas for gemsbok, kudu, springbok and Hartmann’s mountain zebra over time. Note the drops in quotas in 2015 and 2018:

Slashing harvest quotas did not reduce the pressure on vegetation by livestock, or increase rainfall during the next season. Instead, remote sensing data from the end of the “wet” season in 2016 produced a sobering map – the veld condition was far below average throughout the Kunene (Figure 2). Coming on the back of several below-average years of rainfall, the veld throughout the Kunene could no longer support herbivores – domestic or wild. Our 2017 game sightings per 100km of road travelled showed a major decline in springbok, gemsbok and kudu sightings (Figure 3). Once more, the conservancies reduced their harvest quotas, this time to a tiny percentage of the 2014 quota. 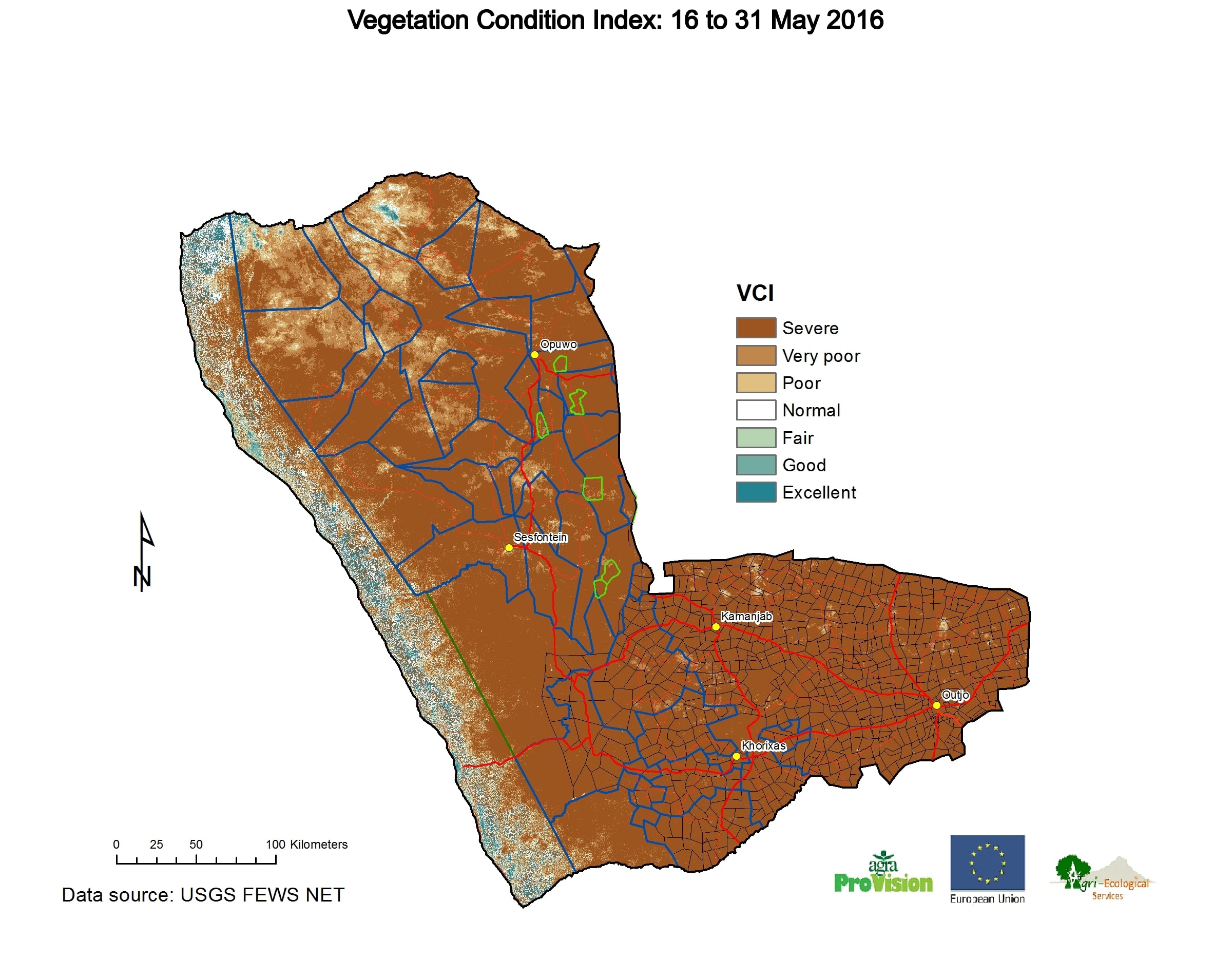 Figure 2. The map of the Kunene Region at the end of May 2016, showing vegetation condition at this time compared with the long-term average for the region (darker brown is further is below average, blue is above average).

Yet this was really only the beginning of the hard times. While 2017 itself was a slight improvement, average rainfall figures in the region declined to the lowest level in 20 years during 2019 (coinciding with a decline in Hartmann’s mountain zebra sightings). The last two years have only seen marginal improvement on that disastrous year. Although wildlife declines are clearly linked to drought conditions, this does not necessarily mean that all of these animals died. While carcasses of kudu and gemsbok were found by game guards, most of the animals would have moved further east and into areas that are further from cattle posts. 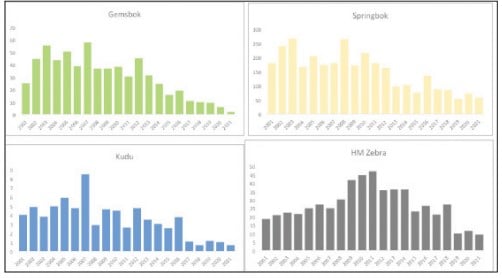 Since the game count routes remain fixed (necessary to produce long-term trends) and use roads and tracks, it is likely that fewer animals were counted simply because they had moved away from the roads and into more remote parts of the Kunene. When the rains return to these areas, these desert-adapted species will also return and reproduce fairly quickly (particularly in the case of springbok) to take advantage of the improved rangeland conditions. In this open system that includes people and livestock, there are many factors that could result in our teams counting fewer game.

The consequence of prolonged drought for livestock is far more clear-cut, and more devastating. Many households in the Kunene Region lost their entire livestock herds – cattle, goats, sheep and even donkeys died in large numbers. Given the aridity of the region, livestock is the main livelihood option, which is supplemented where possible by cash income from various sources. Livestock represent the life savings of many pastoral households, particularly for the Ovahimba and Otjiherero. Losing a whole herd of cattle for these households is the equivalent of someone cleaning out your bank account, repossessing your house, and taking your car, to put it in urban terms. This drought has left them with nothing.

Yet in 2019 and early 2020, at least we could say that tourism and conservation hunting (using the tiny quotas remaining) provided jobs and kept the conservancies’ wheels turning, which meant that conservation continued despite the dire circumstances. Then COVID hit. Without urgent intervention, this would have delivered the knockout blow to a very tired boxer. The few livelihoods left in the region would have evaporated, conservancies would have had to shut down, and people would have been more desperate than ever – perhaps even turning to rhino or elephant poaching as a last resort (this is what happened in the 1980s when similar conditions prevailed.

That this worst-case scenario did not happen is a testament to Namibian resilience and commitment to the CBNRM programme. The Conservation Relief, Recovery and Resilience Facility stands as an exemplar for the rest of the world by supporting rural livelihoods and conservation in the face of severe economic trials. Without this Facility, there would have been no game guards or other conservancy staff to count the game in 2021. Misusing the resulting data to imply that the CBNRM programme is not functional is therefore a slap in the face of every conservancy member who participated in the count.

As NACSO members swung into action in response to the humanitarian and economic crises caused by drought and COVID, others like to sit back and point out that we are still seeing very few animals during our annual Kunene game counts. This result is not at all surprising, given that drought conditions persist in these conservancies, yet the opinion piece last week described it as “shocking” and “deeply concerning”. Using such alarmist terms supposedly justifies calls to undermine the rights of the very people who are suffering most at this time. We are also shocked – that there are Namibians who seem to care more about lions than people, especially people who have shown incredible levels of tolerance for the high levels of conflict they experienced recently due to hungry lions.

The proposed solution to what the author construes as mismanagement in conservancies is to create concessions in the most attractive areas for tourism and make these ‘people-free’ zones. We are not at all against concession areas and similar initiatives like the Ombonde People’s Park, but we do take exception to the way this idea was presented. We would like to know if this idea has been presented at any conservancy meetings? If so, we request the minutes of such meetings and a record of support (or otherwise) for this proposal. If not, then announcing such proposals in national media without proper consultation at the conservancy level is entirely inappropriate. Those who purport to work with conservancies know the correct channels for such decisions, so ignorance is not an excuse in this case.

By contrast, our member organisations continue to work closely with conservancies in their roles as support organisations. By providing support, we mean assisting conservancies to collect and analyse data to inform management decisions, meet MEFT’s governance and financial reporting requirements, and present new ideas to help the programme adapt and evolve over time, among other services.

The prolonged drought and COVID have certainly highlighted the need to adapt, and conservancy members are a continual source of new ideas for the way forward. Recent innovations in CBRNM include Wildlife Credits, community lion and rhino ranger programmes, and the formation of regional conservancy associations. These associations allow neighbouring conservancies to discuss ideas like aligning their wildlife zones, which might result in concession-like arrangements in future similar to Palmwag. As support organisations, we stand ready to provide the data and technical expertise to inform such decisions, but we recognise that it is not our place to make these decisions.

The Namibian CBNRM programme is resilient because of local buy-in, government commitment, and strong technical support services that include long-term game monitoring systems. In our experience, working with conservancies requires humility and empathy – the former to acknowledge that this is a complex socio-ecological system that no one organisation can direct or dictate, and the latter to recognise that people are the real beating heart of conservancies. The wild animals will return, but how we treat people during times of hardship will determine whether those animals will be conserved in the long run.