Shooting or sparing? No consensus on how to deal with elephants - Die Welt, Germany

In other areas, especially in southern Africa, however, there are complaints about an overpopulation of the grey giants. Farmers in villages along the elephants’ migratory routes fear the animals.
Because if hungry elephants stop at their corn field, the harvest and thus the livelihood of a whole year is easily destroyed within half an hour. In Zimbabwe alone, according to the authorities, 60 people have already died by elephants this year.

So are elephants a plague? Or a highly endangered species that needs more protection? Are foreign hunting tourists an opportunity or a danger? Should the trade in ivory be relaxed? The answers depend a lot on who you ask.

The discussion is on how the interests of species protection and the needs of local people can be reconciled. An elephant summit on the edge of the Hwange National Park in Zimbabwe should bring about a unified position of the African states before the CITES conference on the International Convention on The Protection of Species in November.

Host Zimbabwe hoped in particular that the participants would speak out in favour of easing the sale of ivory, which has so far only been permitted to a very limited extent. Zimbabwe also wanted to campaign for the legal shooting of elephants – the approximately 100,000 animals living in the country were simply too many. The total number of elephants living in Africa is estimated at more than 415,000.

The project met with opposition even before the meeting that took place last week: In a joint statement, 45 nature conservation groups called the discussion on legal ivory trade a “dangerous signal” that increases the threat to elephants. 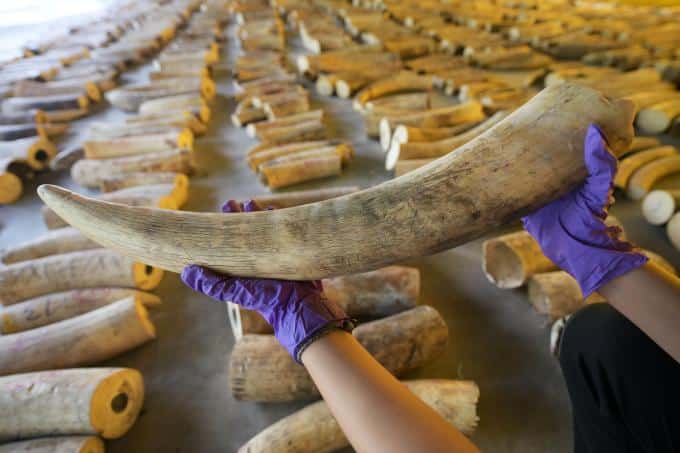 The confiscated tusk of an elephant is shown during a press event in Singapore Source: Then Chih Wey/XinHua/dpa

Since 2009 alone, around 270 tons of ivory have been confiscated from 152 large accesses. “Attempts to resume legal trade would provide organized criminal networks with further opportunities to poach and launder smuggled ivory on the legal market,” it said.

At the conference itself, Zimbabwe remained largely alone in its push to lift the ban on the sale of ivory. The final declaration merely stated that the protective provisions were no longer “scientific”, but based on emotions – it should be examined whether the current convention fulfilled its meaning.

“No One Should Make Profits With Dead Elephants”

The round, which was to speak as the “united voice of Africa”, was much smaller than initially planned: Apart from Zimbabwe, only South Africa, Botswana, Namibia, Zambia and Tanzania were represented. Other countries had not even sent the representatives of their nature conservation authorities – such as Kenya. The East African country has already sent out clear signals on several occasions when dealing with ivory poached elephants by publicly burning huge piles of tusks: No one should make profits with dead elephants.

“No, Africa is not united in opening up the ivory trade,” tweeted Paula Kahumbu, head of the conservation organization Wildlife Direct. She pointed out that in the last relaxation, the number of elephants due to poaching had decreased by 30 percent. “It will happen again,” Kahumbu feared.

The legal shooting of elephants, but also of trophy hunting, was not only an issue in Hwange. Parallel to the Elephant Summit, a discussion event in Dortmund focused on the advantages of hunting tourism for African countries.

“Hunting is important for the preservation of biodiversity,” said Leslé Jansen, Managing Director of Resource Africa. From the point of view of the proponents, there is no contradiction between shooting and shooting – sustainable hunting, in any case, not least finances nature conservation.

The organization is committed to the participation of communities in the proceeds from safari tourism, for example. Jensen pointed to the construction of schools and the training of teachers, which would be financed in this way.

“Politicians should look into the interests of communities living with the game before enacting any laws,” said Siyoka Simasiku, head of the Ngamiland Council of Non-Governmental Organizations from Botswana.

A number of African countries are taking a different path than betting on money from trophy hunters. Kenya banned big game hunting as early as 1977. Tourism, including thousands of safari tourists “armed” only with cameras, is one of Kenya’s most important economic foundations. According to a report by the conservation organization Pro Wildlife, the country earns a billion dollars annually from photo tourism – $30 million would bring in trophy hunting if allowed.