In Africa, “colonial conservation” has become a human rights issue

At a conservation congress 17 years ago, a Maasai leader named Martin Saning’o had harsh words for his audience, declaring, “We are enemies of conservation.”

Well before then, the Maasai had lost most of their grazing land to conservation projects throughout eastern Africa, despite the fact, Saning’o added, that “we were the original conservationists.” Their pastoralist traditions help to pollinate seed species and maintain corridors between ecosystems.

Last June, Maasai villagers in Tanzania found themselves once again in conflict with authorities, resulting in more than 2,000 of them seeking refuge across the border in Kenya. Although this latest conflict seems to have less to do with ecosystem preservation and more with the Tanzanian government wanting to set aside space for tourism, the situation highlights a deep disconnect that can sometimes exist between conservationists’ priorities and the rights of local communities.

Indeed, a month later, participants at the inaugural International Union for the Conservation of Nature (IUCN) Africa Protected Areas Congress in Rwanda voiced similar complaints about what they called “colonial conservation,” an approach that not only ignores community-led solutions but often leads to human rights violations and dispossession. The Kigali Call to Action that came out of the conference emphasized that any plans to preserve nature “should ensure conservation targets are not achieved at the expense of people.” 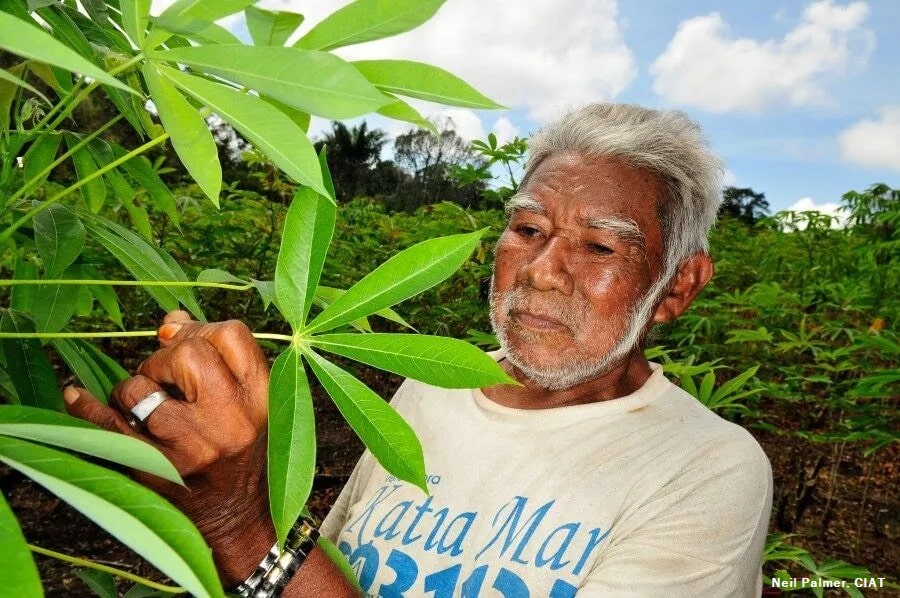 A cassava farmer checks his crops in the Juma Reserve, part of the Brazilian Amazon, where strategic conservation initiatives have sought to include local communities in their development. Neil Palmer, CIAT

According to Luther Anukur, IUCN’s regional director for eastern and southern Africa, the Union will continue to facilitate joint commitments among governments, civil society, development partners and other actors.

How to design conservation policies that respect both the rights of local communities and ensure the health of neighboring ecosystems is not, however, a simple task.

When it comes to local communities and Indigenous Peoples, “not everyone is going to be naturally conservation-oriented,” says Anne Larson, Principal Scientist and Team Leader at the Center for International Forestry Research (CIFOR).

“The bigger issue is that [conservation] has to be designed by local people and meet their livelihood needs and priorities that ideally are coinciding with the goals of whatever the international entity is that’s trying to improve the sustainability… If [local communities] are having land taken away from agriculture that they need for food security, that’s going to be a hard one. And if [that happens], then they are going to need to meet their food security some other way. Those are all things that need to be addressed.”

Then, those communities “need to get the kind of support to make it happen,” she adds. That support starts with helping communities to have their rights officially recognized by national governments, while helping ensure people have the capacities and skillsets to carry out the conservation efforts.

For Ineza Grace, executive officer at Rwanda-based youth-networking platform and think-tank The Green Protector, any effective conservation policy needs to be transparent and clearly articulated. By taking the time to learn what a community is already doing, conservationists can amplify and strengthen existing measures, she says, “rather than redefining what they are doing.

“If you’re not actively engaging with the community, the solution will not last,” she says.

Larson, who has worked on this topic across continents, points out that while land evictions have been and are still occurring in Africa, there are examples of conservation organizations working with Indigenous Peoples – who often do, it turns out, have different goals and priorities. In Larson’s extensive experience in Latin America, there has been, she says, a history of conservationists and Indigenous groups working together. “So there are different models to look at, and to learn from what’s been done elsewhere, from the places where things have actually worked out in benefit of local people.”

What’s more, she adds, conservation should not simply mean setting up a park or a reserve. “We need to start thinking about areas outside of parks,” says Larson. “Conservation needs to happen everywhere. Every single landscape we have can probably be improved, because there is so much degradation around the world.”

Rather than locking up an area, or even creating a park and letting people live there, she says policy makers should focus on the planet holistically. Enriching pasture by planting trees around their margins, alley cropping and incorporating agroforestry into traditional agricultural settings can all help to make the earth more sustainable. “Every area needs to do better,” she says.

Grace, meanwhile, points to Rwanda’s annual Kwita Izina naming ceremony for baby gorillas in Rwanda’s Volcanoes National Park as one example of engaging local communities. “They are active in the gorillas’ protection because they understand the value of conserving the gorillas,” she says, “and because they are included in the design of the solution.”

While the main goal of the ceremony is to help monitor individual gorillas and groups in their natural habitats, it also works as a fundraiser. “And the funds raised are used to conserve the forest, first of all, and secondly, to help the community live better,” she says, “with roads, schools and access to health insurance. So having an approach where you are conserving the environment but at the same having it lead to the socio-economic development of the community – it’s something that should be amplified.”

“Communities can and should be leading conservation,” says Larson. “It’s not going to work unless they do. It should not only work for them. It should be designed and developed by them.”